Last night I had the great pleasure of attending a BJJ seminar with Gracie black belt, Penny Thomas, at the Warrior School of Combat, Kensington. The seminar was co-ed with a slight majority of female players and a good range of white to purple belts. It was absolutely packed. Just goes to show how many folk are willing to make last minute plans for a BJJ treat, with one plucky lass coming down from Birmingham.

We warmed up with a selection of takedown drills, including double and single legs, what we call ‘Drop Seoi Nage’ at my club (a sacrifice version of Ippon Seoi Nage) and sweep to mount/side mount from the back and front. Here, Penny highlighted the importance of encouraging the opponent to fall into the trap of the takedown. So, if the goal is to get the opponent’s weight moving forward, push the opponent back, so their reaction to move forward initiates the takedown you’ve in mind, hence the use of opposing forces. Personally, I was interested to note the similarity in Penny’s approach to these techniques and how we train them at Dartford BJJ; Penny even calls her arm position ‘T-Rex arms’, just like Coach! For me, the synergies between Penny’s approach and what I train normally was comforting and made me feel part of something bigger. The ‘story’ of Gracie Jiu Jitsu is told around the world, and while there may be minor regional variations in how that story is interpreted, the core is preserved and shared by the entire Gracie community. This sort of outside reinforcement also boosts my already deep trust and confidence in the Marc Walder/Mauricio Gomez technique that is part of what we do at Dartford BJJ.

The ground-work portion of the seminar focused on mount and open guard. We looked at some of the fundamentals of the mount position, specifically grape-vining the opponent’s legs while driving weight through hips into solar plexis – I’m on the receiving end of this whenever I spar with Coach, not comfy – and working to get knees under opponent’s armpits while tucking the feet onto the ‘shelf’ of the opponent’s hips. Penny reinforced the importance of dropping the body’s full weight through the opponent and ensuring the position prevented weight being supported by knees rather than the opponent. From the mount we drilled Americana, Ezekiel and arm triangle. Again, the use of opposing forces and the body’s full weight was clear, and, for example, in drilling the Americana we feinted 3 attacks against alternate arms, on the third driving full weight against the arm to drop the elbow by the opponent’s head and take the submission. I especially enjoyed the open guard drills, as this is a new facet I’ve just started working and we looked at one of the three basic sweeps I’ve been looking at. The importance of pushing and pulling to control from open guard gave further evidence of the theme of opposing forces to both control a position and to feint; as a standing opponent lost base due to the push-pull of the open guard and came to one knee, an opportunity was made for the sweep.

Photo reproduced by kind permission of Meerkatsu (who’s review of the seminar you might also be interested in).

I matted half of my basement, last weekend, with 40mm jigsaw mats from Cannons UK Flooring; it is now an absolutely superb training space! One of the best purchases I’ve made in a long while, and I would highly recommend these mats to fellow grapplers.

Cannons UK offers very high quality mats at a fraction of the price charged by other online retailers (between £50 and £150 less than other suppliers for my 12 square meters). I was somewhat put off by the website, which is, shall we say, less than polished with some slightly eccentric behaviours, however I was convinced they were legit when I rang to see about placing an order. The customer service was friendly, professional and efficient, not to mention delivery was only £10 and they delivered next day. Well above par from what I could tell from competitors’ sites.

The mats are reversible (red or blue) and come in two finishes; I chose tatami. All mats come fully surrounded by edging squares. The mats arrived in perfect condition and were very easy to lay. The jigsaw edges fit snugly and as you would expect. It took 20 minutes or so to trim the included edging squares to fit around the outside; this was very straight-forward and there’s so much surplus edging that it is possible to have several attempts at any trimming jobs that aren’t up to standard.

While I am hoping to roll on these babies this week, I have so far used them for Pilates, stretching, partnerless BJJ-drills, sprawls and calisthenics. While I was at first concerned that the finish was a mite too slick, in fact it has a nice level of grip so that there’s no mat burn, but enough friction to not go sliding wildly when in Yoga postures or moving across the mats in elbow-to-knee. The 40mm thickness is a dream. The mats are laid on concrete, but the exceptional EVA foam core means it is entirely comfortable to sprawl as hard as you like, break fall and so on.

Mats are a pretty major purchase and I had tried to win some, with readers’ kind support, in BView’s 99% off contest; I came second place, but by this point was totally fired up to make it happen. I hunted around online for weeks comparing prices and Cannons UK was by far the best priced and I can affirm the high quality of the mats. Having a home matted area has been a goal for some time and I am really pleased with the end result. 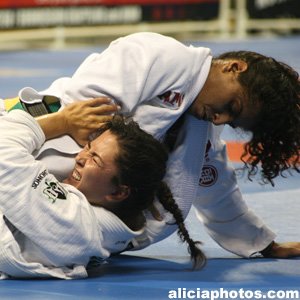 In an effort to provide a quarterly forum for women’s BJJ, Dartford BJJ is hosting its second Women’s Open Mat on Sunday, 22 November 2009:

Women, 16 and over, are welcome for an informal afternoon of drills and sparring with kindred BJJ-women. Previous BJJ-experience is not necessary (our July open mat included women with zero to years’ experience).

The Open Mat is free of charge.

Please email me (meg.smitley@megjitsu.com) to confirm your interest or for further info.

By car. If travelling by car, checkout the RAC Route Planner (destination post code is DA1 2EU). Free parking is available. The club is located on the first floor, via stairs to the roof. A banner for the club is visible from the parking lot.

By train. If travelling by train, the Academy may be reached by cab (queue just outside Dartford Rail Station). The journey to West Hill House, where the Academy is located, will cost about £3.50. The cabbie may know West Hill House as ‘the old YMCA’. Alternatively, the Academy is about a 15 minute walk from Dartford Rail Station. Leave the station and cross over the foot bridge. Continue on and veer left through a short alley way. Turn right when leaving the alley and enter the High Street. Carry on to the cross walk and climb the hill (West Hill). Turn left into Tower Road, and left after the pub. Follow the parking lot to the end. The Academy is located on the first floor which is accessed by a set of stairs that are surrounded by wooden fence (a large banner is visible from the parking lot).

Today, I hosted a Women’s Open Mat for female BJJ players; Coach kindly offered Dartford BJJ free for our use. We had a great time, and I’m hopeful other female players will organise similar events at their clubs. Younger and older, more and less experienced women came together for an informal day’s training, with one practitioner making the trek from Eastbourne with her mum, who has never trained before, in tow. One of the participants was kind enough to lead us through a warm-up of running and line drills, followed by a stretch. We then took turns demonstrating techniques we enjoyed/had success with/were working on, and drilled these for five minutes; we rotated partners for each drill. We finished the day with sparring for five minute rounds, again switching partners every time. It was a real pleasure to work with other women in what I felt was a very relaxed, non-competitive environment; a nice change from seeing these ladies only at competition. I was interested in the groups’ slightly different approaches to familiar techniques and really enjoyed sparring with a group of ladies. No one was trying to mash each other, just working their stuff, and their games were all very technical, tight on the defence and chilled out. Ironically, a ladies-only event impressed upon me the importance of diversity in the dojo; in a very broad way, men’s and women’s games are different. I believe working with these different energies and approaches, which mobilise men’s and women’s different gendered and innate physical and cultural characteristics, helps folk develop the most well-rounded and robust games. As in nature, where a more heterogeneous mix creates the healthiest individuals, so in life, on and off the mats.

Attended the second of this year’s quarterly BJJ seminars with Marc Walder at Dartford BJJ. Great atmosphere, as ever, with a mat-full of people buzzing and ready to train. In deference to the warm weather, Marc taught a no gi seminar – not a strong area for me (I don’t know what to do with myself if I can’t grab a collar or a sleeve or a cuff). We rep’d hard and concentrated on flow beginning with a rear take down from T-clinch, then taking the back as the opponent counters the take down, ending with an arm triangle where the opponent counters the RNC.

A big high point of the evening was the promotion of one of the blues to purple. An amazing achievement which gave us the opportunity to hear some experienced words from Marc; getting a taste of Marc’s very centred perspective on training is a big draw for me. Coach and Marc both praised our new purple’s dedication and work ethic. In stressing the importance of consistency and committed training Marc emphasised the importance of finding a balance between training with sincerity and dedication while handling business off the mats. This is a theme I’ve often heard from more experienced martial artists such as Coach, Terry Barnett and Marc and it can be tremendously difficult to get it right. I suppose many people who train spend a lot of their free time away from their loved ones, which can be hard on home life, but equally they can struggle to know when to step back and have a rest or when it is time to push past current endurance. It is a fluid balance that shifts with life’s ever-changing context and the martial artist must continually evaluate her training regime (inside and outside of the dojo) to seek to maintain a homoeostasis between work, family, fitness and class time. In turn, striving for this balance represents one of the many bigger picture life lessons that I take away from training. Balance in all things, baby, balance in all things.