On Sunday, 20 BJJ women gathered at The MMA Clinic Romford for the 7th London BJJ Women’s Open Mat. Big thanks to our hostess, Tanya Coombes, and the good people at the MMA Clinic for providing us with a wonderful place to train and share our BJJ-thoughts at our second quarterly event of 2011. 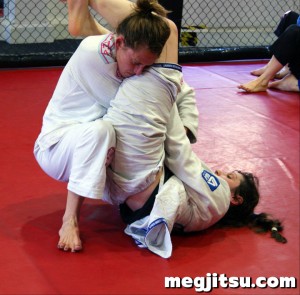 While my poor planning meant that I wandered in an hour late (with a few other stragglers), the girls had dived straight in and were well into a sweaty sparring session by the time the last of us arrived. As our numbers swelled we moved from the matted cage area to a larger matted space the floor below. After an hour’s sparring it was decided to take a breather with a few basic drills. We were lucky enough to have several women completely new to BJJ join us – we hope to accommodate women of all experience levels – so we looked at two basic arm bar drills; one from mount and one from guard.

The bulk of the remainder of the session was spent sparring and this was perhaps the most sparring-heavy of our events, which is marvellous! There is such a strong appetite for female sparring partners among many BJJ women and it was clear that sparring was the main interest of the day’s participants. The atmosphere, as ever, was very informal and women dropped in and out of the sparring as it suited them and rolled without time limits. Just playing around and testing their stuff with training partners of similar size and strength in friendly fashion.

The London BJJ Women’s Open Mat has gained momentum since its beginnings in 2009 and it is thrilling to see the enhanced games of more veteran women alongside an increasing number of white belts. It seems, from our attendance, that there are more women taking up the art and sticking with it! Heartening to see. Personally, I very much enjoyed rolling with women I’ve not previously had the opportunity to train with, from promising white belts to hungry blue belts. Indeed, hungry was what we were when the session came to an end and a group of us trooped off, predictably, to Nandos. Though we’d had a vigorous session and my shins were peppered with dainty lady-hand sized bruises (much cuter than the normal brutish manhand bruising), after I’d refuelled I headed to Coach’s Sunday class in nearby Ilford for guard work and sparring with massive dudes; gotta have some yang with your yin. We’ll be announcing the Q3 event shortly, so watch this space and see you again soon!

Photographs of the event are reproduced with permission of BJJ woman, Latonia Phillpott. Latonia, unhappily, suffered an injury to her ankle on the day; alas, accidents happen. We wish her a swift and full recovery!

« Self Defence for Women: Round Up of Seminar at Phoenix MMA » Predator BJJ Clothing: Women’s ‘Predadora’ BJJ Gi Pre-review