Brazilian Jiu Jitsu is part of my martial arts journey. For me, to describe (and confine) BJJ as a ‘combat sport’, strips away so much of the value and depth of the art, reducing it to a much less multi-dimensional pursuit of validation through medals and athletic achievement; I see jits as a more esoteric pursuit of personal growth and improvement. While I certainly see competition as a valuable learning tool, to me it is all about emphasis and, to my mind, competition is an important complement to BJJ training, but not the end for which training is the means; my perspective is neither ‘right’ nor ‘wrong’, but it is mine and this blog is my party. 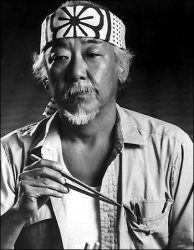 There is no agreement in the BJJ community over whether or not Brazilian Jiu Jitsu should be termed a ‘combat sport’ or a ‘martial art’. Those who prefer the term ‘combat sport’ seem to wish to distance themselves from the douchebaggery popularly associated with martial artists as famously personified by Martin Kove’s John Kreese in Karate Kid or Diedrich Bader’s character, Rex, in Napoleon Dynamite, as well as from the mysticism portrayed by Pat Morita as Mister Miyagi. This is evident from responses to a poll run by the FightworksPodcast questioning whether or not practitioners consider themselves ‘martial artists’, where ‘no’ respondents pointed to the lack of formalised spiritual learning, ceremony and other ‘hokey’ trappings commonly associated with traditional martial arts or at least the popular perception thereof. In this case, a majority of respondents argued for BJJ as a ‘martial art’ and ‘yes’ respondents highlighted BJJ’s capacity to promote personal development on and off the mats:

I can honestly put my hand on heart and say that I have changed thru the training on the mat and that that change is evident off the mat too and that’s why I say that I’m a martial artist. The principles of jiu jitsu influence most of my off-the-mat activities (diet, relationships, work, gym, studying…etc.) and I am very grateful for that. I’m a part time grappler, but I’m a full time martial artist’ – Liam Wandi author of Part Time Grappler

While I empathise with the desire to distance one’s self from pretentiousness and cornball mysticism, for me, Wandi neatly summarises why I embrace characterisations of BJJ as a ‘martial art’ and reject the label ‘combat sport’. BJJ is very challenging and very rewarding. It requires a fully harmonised mind and body for proficient performance and I am absolutely convinced that my struggles and successes on the mats have helped me to become a better human being. While I recognise preparing for and participating in competition to be an important aspect of training and have personally found the experience an invaluable learning-tool, I heartily concur with Rickson Gracie’s assertion that tournament work constitutes 30% of jiu jitsu. My understanding and practice of BJJ as a martial art, where competition is a significant but minority element, is coloured by my roots in the traditional Japanese art of Shorinji Kempo.

I started my martial arts journey in 1998, in the year between my graduate and post-graduate studies, in an American ‘ninjitsu’ system called IOMASDA Ryu; yes, I was a big enough douchebag to assert to the man I was to marry, on our first meeting, that I was a member of a ‘ninja clan’, but I was only 23 and there’s been a lot of water under the bridge, so forgive the transgressions of the young. Point is, that first year got me completely hooked! My instructors were kind and enthusiastically supportive and I jumped in with both feet, training with an almost fevered passion, dedication and consistency in and out of the dojo. When I moved to Glasgow, UK to pursue my PhD, a major priority was to continue my training; within a month I’d found Shorinji Kempo, fell in love with the club and by 2002 I’d attained the rank of shodan.

Until recently, and certainly while I was active in the community, Shorinji Kempo was a recognised religion in Japan; the art was designed as a system of physical and spiritual progression to develop the individual’s full human potential. Promotion included both a test of the kenshi’s mastery of the syllabus as well as written examinations on the philosophy of Shorinji Kempo. While I have travelled far from those days, the core principles I came to cherish as a kenshi remain with me and very much guide my training in BJJ.

The Fukudoku-Hon – the textbook of Shorinji Kempo philosophy that guides kenshi to shodan-level – defines 6 characteristics of the art, the first of which is ken zen ichinyo (body and mind are the same). The pursuit of a unified and balanced mind and body has been central to my martial arts journey. While I am grateful that Shorinji Kempo articulated this notion, formally emphasised its importance and that I had the opportunity to seek development of this principle in myself through Shorinji Kempo, I find that Brazilian Jiu Jitsu allows me to more effectively pursue this aim and to evaluate my progress. 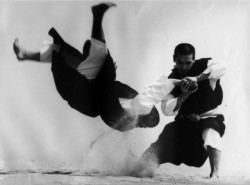 My BJJ practice – and that practice is shaped by myself, by my training partners and my instructors at Dartford BJJ – acts as a barometer for my life’s equilibrium. Since my Shorinji Kempo days, a personal motto has been ‘balance in all things’. Of course, striking a perfect balance in all things may not be a practical goal, but it is all in the striving. Life is fluid and demands a ceaseless process of prioritisation, re-evaluation, re-ordering, negotiation and implementation; those readers familiar with the mats will recognise that here ‘life’ might be substituted with ‘BJJ’. BJJ practice has taught me that I perform best when fully engaged and present in ‘the now’ both cerebrally and corporeally. When anxious about what I must or mustn’t allow to happen, what I must or mustn’t do, my performance suffers. Similarly, if my mind and body aren’t in balance, my performance suffers: if I eat too little before training, I’m sluggish in sparring and unable to make the best of the opportunities that present themselves; if I train too hard for too many consecutive days, my sparring is loose and lacks intent; if personal or work pressures are getting the better of me it is difficult to let go, get with the program and roll with focus. Because Brazilian Jiu Jitsu is such a physically, emotionally and mentally challenging discipline it very clearly reveals to me when my life’s balance is out of whack; once I’ve re-tuned it is clear from my rolling when the discord has been resolved.

This is the first in a series of three pieces in which I hope to interrogate my own motivation for BJJ practice and to unpack my rather traditional approach to this non-traditional art. This is just one woman’s truth; leave a comment below about how you see BJJ. Is it a ‘combat sport’? Is it a ‘martial art’? What do such labels mean for you?